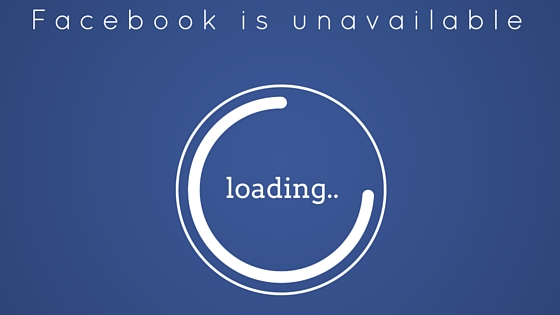 For the second time in a week, Facebook has gone down, whilst many of you twiddle your thumbs and wait for the social media giant to be back up and running.

If you are an avid user of Facebook then you will have noticed that this coincides with Facebook being down for roughly 12 minutes last week but yesterday they were offline for up to 40 minutes.

“Sorry, something went wrong. We’re working on it and we’ll get it fixed as soon as we can.”

And so of course if you are a Facebook addict then you were probably greeted with a look of panic due to the fact you will not be able to view your friends dinner for the night, or their funny meme’s.

But it didn’t just affect UK users of the social network, no it also affected our cousins from across the pond, over in the US

“A Facebook-wide issue is causing the Facebook Graph API to be temporarily unavailable. We’re working with our core infrastructure teams to identify the issue and will update you when we have more information.”

The last time that Facebook had a problem similar to this they admitted that It was their own engineers that had caused the problem by tinkering, maybe that is the case here but until an official announcement is realised we are none the wiser

If you want to see some of the Tweets that some people had been sending out go and check out the BBC’s news article all about it.
Also why not check out these articles: